On the IML solutions’ blog you will find all the news within the In-mould Labeling, robotics and automation. Discover new trends and our view on the technological advances that deliver real value to the Injection Molding Industry. 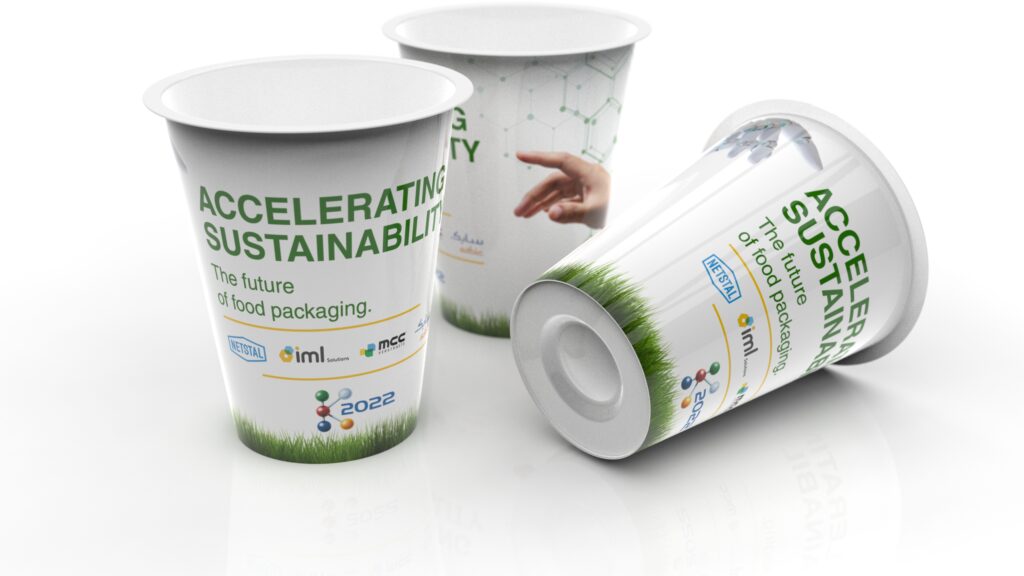 What will be the future of food packaging? There’s probably not a simple answer for that. But what we know for sure is that it will include many of the characteristics of this project showcased in K2022. END_OF_DOCUMENT_TOKEN_TO_BE_REPLACED 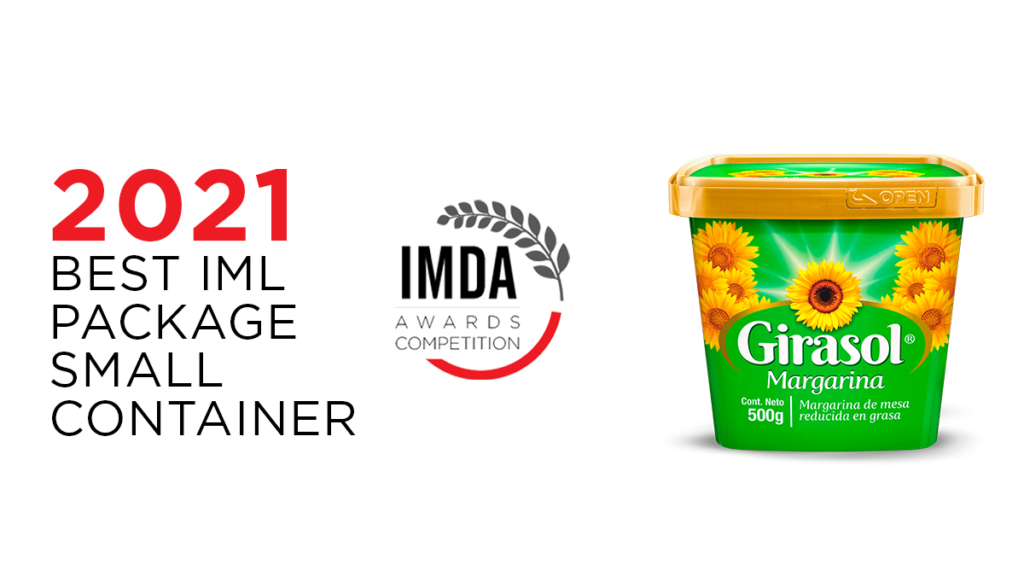 The revolutionary project developed by IML Solutions for LA FABRIL, recognized as Best IML container by the experts committee of the In-mold Decorating Association.

END_OF_DOCUMENT_TOKEN_TO_BE_REPLACED 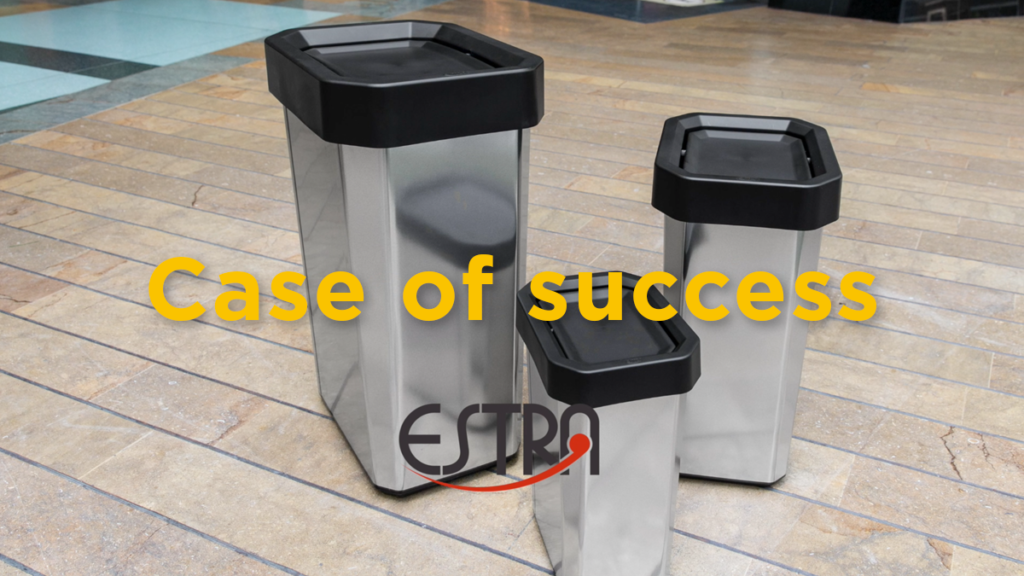 Turneky Project for the producction of a complete range of bins.

The client requires a lot of versatility to meet the market requirements and the possibility to work with big format metallic labels.

Discover the proposed solution and the advantages of working with only one specialized supplier like IML Solutions.

END_OF_DOCUMENT_TOKEN_TO_BE_REPLACED 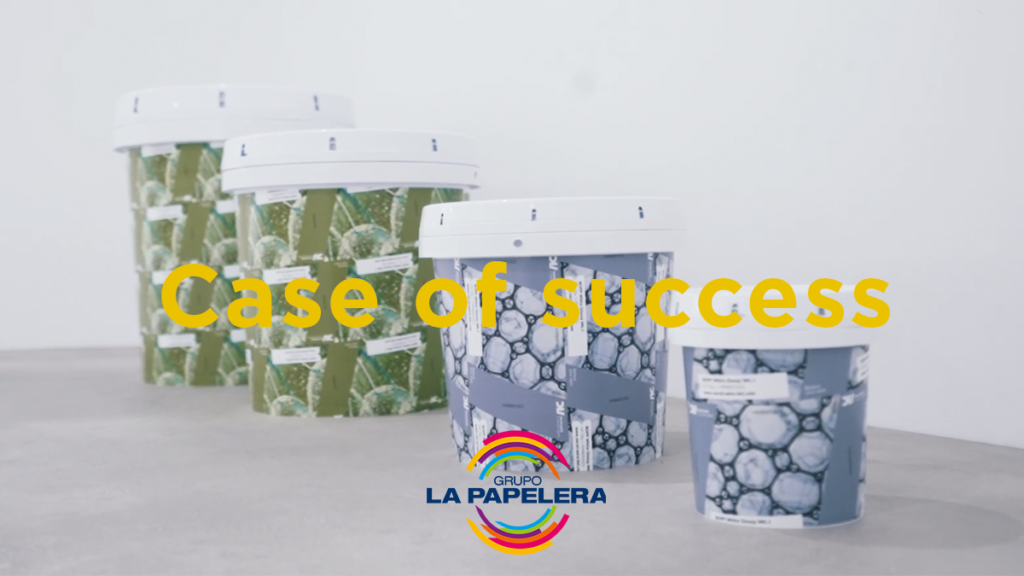 Redefining the quality standards for a category

Turnkey project for the production of a pails family in 4 formats.

Due to the market characteristics, the functional requirements of the client are very particular.

Discover the proposed solution and the advantages of working with only one specialized supplier like IML Solutions.

END_OF_DOCUMENT_TOKEN_TO_BE_REPLACED 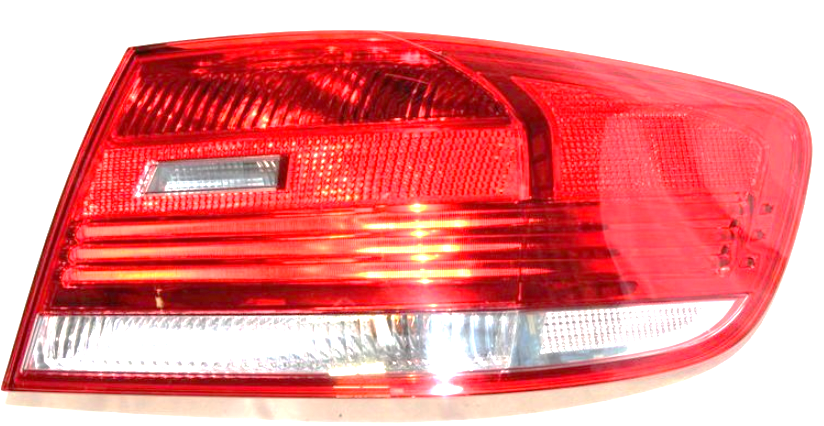 A traditional or conventional plastic injection mould is known as a cavity, a punch and access to material in a state of fusion (we usually speak about plastics), which, by means of the injection process and cooling, we obtain the product that has been designed.

On this basis, we are led to understand that the product can only be manufactured in a single material and, by material, we also understand colour and, therefore, we produce a product in one specific material and colour.

What is a Multi K multi-component injection process?

The injection process allows us to create a product in two or more materials/ colours in a single injection phase (cycle). Without penalising the production cycle or doing so only slightly.

This injection process has one very obvious advantage, production cost savings. Normally, to manufacture a product that has two or more materials, we must design and build the means of production, manufacture the products (we would now call them components) and assemble them in a post-production process.

By way of example, we will consider the injection process for a hair dryer or a drill with a plastic structure and a rubber handle. If we were to work on the components individually, we would need two moulds and two independent production runs. This involves longer consumption times for the injection machine and a reduction in production capacity. Furthermore, the cost of storing the components and the subsequent assembly of the same, which often requires either screw or chemical bonding systems, need to be added, thus increasing costs. These may sometimes be clip systems but, due to the design or materials, this is not always possible.

We therefore consider that the cost-saving benefit is an element to be borne in mind when it comes to opting for the Multi K multi-component injection process.

The operation of Multi K moulds is relatively simple, the concept itself is simple, the execution or industrialisation are, generally, somewhat less simple.

Steps to bear in mind for manufacturing a Multi K process.

When it comes to designing a product that must be composed of different materials, the first thing to look at is the chemical compatibility of them, thus, for example, ABS/PC does not adhere well to EPDM although it does so very well to TPU or EPDM + PP…. It is therefore important to review the specifications of the materials and look at their compatibility.

There are always design tricks that help with this, such as, for example, adding zones of physical solder that support the forces of disassembly, but these need to be studied closely if we want the product to be durable and strong.

Another important point when it comes to the design that we have to think about is that the mould will not be conventional, and we shall discuss this further below, and it should be considered that injection zones for each material that can be industrialised, must be designed.

A further critical design point that also concerns the mould and the injection is that we can never inject both materials at the same time, but that one will go first followed by the other(s). And, therefore, the thicknesses of each part need to be designed so that they may be filled and should be designed bearing in mind that the closure zones of the mould need to be strong enough to prevent leakages between the two materials.

To manufacture, we will use machines and moulds that are adapted for them.

The first thing to bear in mind is that both the machine and the mould must be prepared to have several inputs for materials, for the machines, known as injection units, we have several systems available.

We have several active systems for Multi K injection moulds; below, I note those most used on the market, but there are more.

They are the simplest with respect to the mechanics, we have 2 phases, one for each material, the procedure is to manufacture the first of them and, either automatically or manually, they pass to cavity 2 (same mould) and the second material is injected.

The main characteristic of these is that the part with one material (we could say incomplete) is not extracted from the mould, therefore, the machines or moulds should have a rotational system that allows it to rotate to position the punch over the corresponding cavity. These usually rotate through 180º, but it depends on the materials to be injected or phases, it may rotate through 120º (3 spins) or even more. The spin device (spin plate) can be incorporated into the mould (this is called an indexed plate) or into the machine itself, where we can have it horizontally, vertically or in what are known as Swivel systems (see image), which rotate on their own central axis.

The part is only extracted when complete, having passed through the final phase.

This process has the advantage of not needing anything added to the machine except the incorporation of a hydraulic system and, obviously, several screws.

The mechanics of this system is to generate a cavity with a variable geometry cavity, which, by means of hydraulics, we open up the space required to incorporate the second material, in other words, we would inject the first material, activate the pressure and move one plate of the mould, ensuring that the cavity has enough space for the second material to be injected.

This process may be less well-known, but it is very useful for certain complex and very specific applications and may mean a substantial saving with regard to raw material. Since, due to its configuration, economic materials may be put in the nucleus of the part and technical materials on the outside.

This process is characterised by injecting 2 components through the same injection point and the part making a sandwich of two materials in 3 layers.

This means that we obtain a full outside covering in one material and an isolated and invisible nucleus in another material.

This case requires specific machine characteristics, it being possible to use, or allowing the use of, a conventional mould. 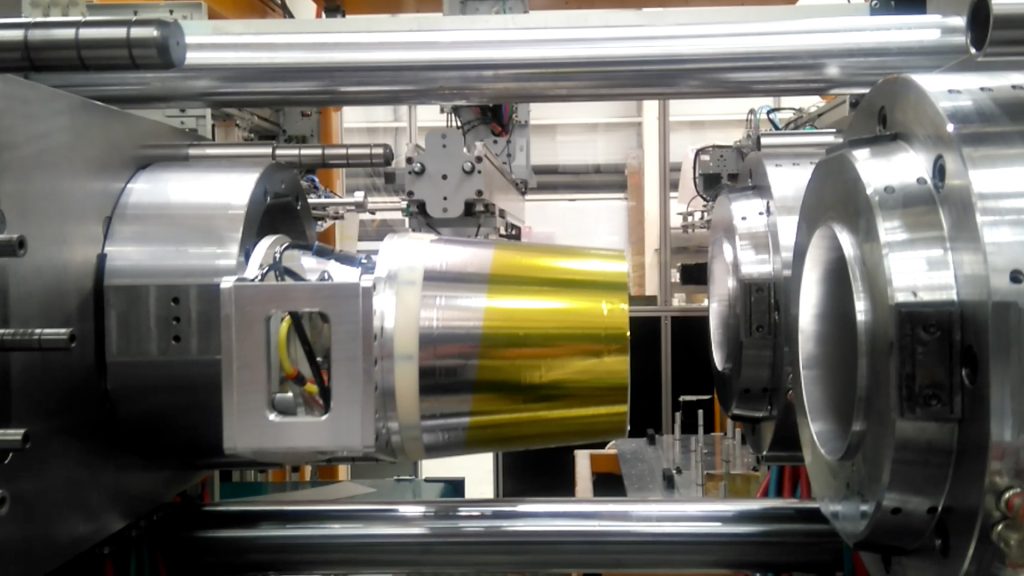 By Sebastian CanoMoulds, Robots
The use of metallic labels in IML (in-mold-labeling) is a growing trend that reaches practically all consumer sectors, since with its use you can get a premium finish that will allow you to better differentiate from your competitors. Nevertheless, finish effects are not the only advantage that metallic labels present. END_OF_DOCUMENT_TOKEN_TO_BE_REPLACED
Love0 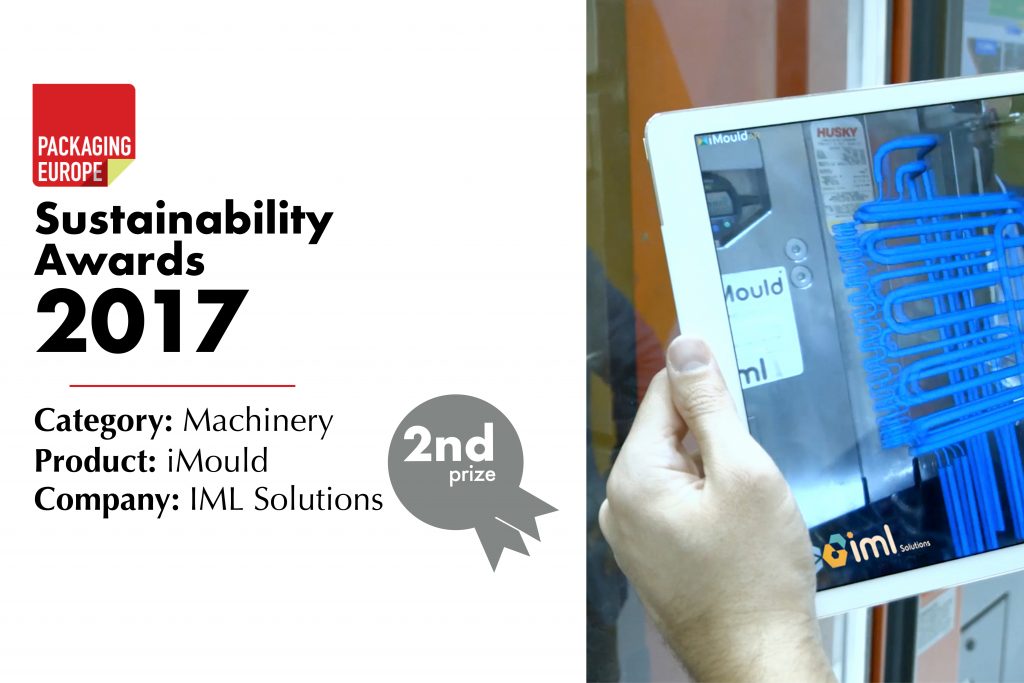 iMould, takes a prize in the Sustainability Awards

iMould, the first intelligent mould, introduced by IML Solutions during K2016 trade show, took the 2nd prize in the machinery category during the Sustainability Awards organized by Packaging Europe. END_OF_DOCUMENT_TOKEN_TO_BE_REPLACED

By Sebastian CanoIML, Robots
Discover with this infographic the main features of the IML Hybrid Robot.
END_OF_DOCUMENT_TOKEN_TO_BE_REPLACED
Love0 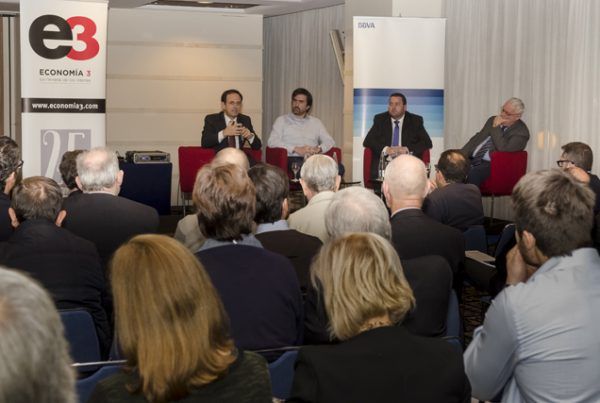 IML Solutions takes part in the Industry 4.0 experts panel at the event organized by Economía 3.
END_OF_DOCUMENT_TOKEN_TO_BE_REPLACED

We will come back to you as soon as possible

Do you have a project? We will be glad to help you.